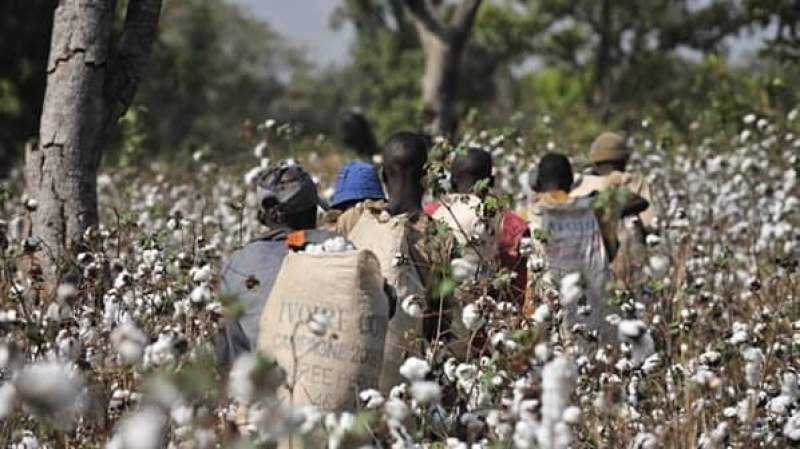 Since the first year of commercial planting of biotech crops in 1996, more than 70 countries from all over the world have either planted or imported biotech crops, according to the International Service for the Acquisition of Agri-biotech Applications (ISAAA). Malawi is one of those countries.

In light of this, Chikondi Mphande sought to explore the opportunities that Malawi could take advantage of with regard to agriculture biotechnology that could help to solve some of the challenges the country is facing.

Chikondi is focusing on how Bt cotton, a variety of genetically modified cotton, has improved the lives of farmers in the country and how the food technology sector could also benefit from agricultural biotechnology in the country.

Funsani has been growing cotton for 15 years, but the cost of production was very high for him because the old varieties of cotton he was growing in the past were not resistant to the African bollworm.

According to Funsani, labour costs were also high and he and fellow farmers were spending a lot of money buying chemicals to control pests and diseases.

"The new Bt cotton is very good. It is resistant to African armyworms and crop production has increased; my life has changed, I have constructed several houses for rent, and l now own a butchery, and I’m paying school fees for my children easily. l am an agro-dealer too," adds Funsani.

The Director of Agriculture in Balaka Dennis Zingani says cotton is the main cash crop for most farmers in the district, and currently 3000 farmers are growing Bt-cotton on some 2000 hectares of land in the district.

"Bt cotton has increased production for farmers as they are now harvesting over 2000 kgs of cotton per hectare unlike in the past when they were harvesting only 500 kgs per hectare," he explains.

Genetic engineering, also called genetic modification or genetic manipulation, is simply defined as the modification and manipulation of an organism's genes using technology to suit human needs. This is the process used to come up with Bt cotton.

An Agriculture Expert Leonard Chimwaza says the introduction of Bt cotton has helped in many ways. The country is now able to produce more cotton seed and the cost of production for farmers is now lower yet they are earning more.

Said Chimwaza, "Hybrid seeds have the potential of producing a lot of cotton per hectare. Most farmers are now realizing over 2000kg of cotton per hectare - this is good. There is an improvement so it was proper for this country to adopt improved cotton seed varieties."

The National Commission for Science and Technology (NCST) promotes research activities in Malawi. It has been in forefront guiding experts on the adoption of biotechnology products in Malawi, including Bt cotton.

Research Officer for Agriculture at NCST Yohane Chimbalanga says Malawi, as an agro-based economy, is facing challenges to increase productivity in the agriculture sector and adopting more biotechnology or genetically modified crops is crucial.

"We have seen potential in biotechnology. It can assist to address some challenges in the agriculture sector. Although it is difficult to find people to support research in this field, a few organisations are willing to support, like the Programme for Bio-Safety Systems," said Chimbalanga.

Away from nonfood crops, experts say biotechnology can solve fuel, fertilizer, forex and climate change challenges currently facing Malawi and other African states, hence the need for the country to take it seriously.

Dr Kingdom Kwapata, a lecturer at the Lilongwe University of Agriculture and Natural Resources (Luanar) says biotechnology is the best tool that could be used to solve some challenges like food insecurity, fuel and fertilizer shortages.

Dr. Kwapata argues that while the government is planning to establish mega farms, importing thousands of cows that are adaptive to climate change could be expensive but importing embryos that could be inserted into local cows for the country to have superior varieties of cattle could help save a lot of money.

"There are a lot of opportunities that this country can explore regarding biotechnology, the issue of food security, biofuel, fertilizers, issues related to embryo transfer.

“We cannot import the whole cow, but import embryos that could be inserted into local cows for the country to have superior varieties of cattle,” adds Dr Kwapata.

He stresses the need to have a formal channel of communicating research findings among researchers, the ministries of agriculture and health for more people to understand the benefits of agricultural biotechnology.

Director of the cotton company Quton Limited John Lungu says farmers who have started growing Bt cotton are making huge profits hence the need for Malawi to adequately invest in the technology.

Lungu says, currently the company provides seed to farmers on loan and they pay back at the end of the selling season.

He says cotton, being the third crop that contributes to economic growth in Malawi, the government needs to invest a lot of funds in GM cotton which can complement tobacco, the current key cash crop for Malawi.

"The price of tobacco this year has been the best price ever, farmers were paid a lot but we see cotton as a good complementary crop to tobacco with potential yield in the search for a crop that can complement tobacco. Cotton is an obvious one," Lungu says.

To deal with myths and fears associated with GMO products, all such products are registered and regulated in Malawi.

However, the Biosafety Registrar in the Ministry of Natural Resources and Climate Change, Dr Lilian Chimphepo, says limited awareness on biosafety issues, inadequate budgetary support for biosafety at national level is a challenge.

Chimphepo adds that this is the reason why Bt cotton was approved but permits for transgenic banana and cowpeas were prematurely terminated due to lack of funding.

"The first technology which has been approved is Bt cotton. The banana field trial was terminated prematurely due to lack of funding. When it was implemented, it met challenges with Covid19 and donors changed their focus to support Covid19 other than trials,” Chimphepo disclosed.

Professor James Bokosi, a specialist plant breeder at Luanar, says it is sad that Malawi has not seriously taken advantage of some technologies available and that the authorities are skeptical to approve food products like cow peas and banana despite that they were tried in other countries and were proved to be good.

"We have been successful on one commodity - Bt cotton. We were doing some work in banana and cowpea but we have not advanced; we have stopped at research stage. We did not go towards field testing.

“Another challenge are issues to do with regulations and reluctance by researchers in the department of agriculture and research; they are skeptical about food products,” discloses Dr Bokosi.

Depending on one cash crop is not helping the country. There is a need to approve more genetically modified crops like cowpeas and bananas to both improve the country’s forex earning and increase food security in the country.

Where safe standards are safeguarded, officials have no reason to shun approval of more GM products in Malawi. Responsible biotechnology is critical.