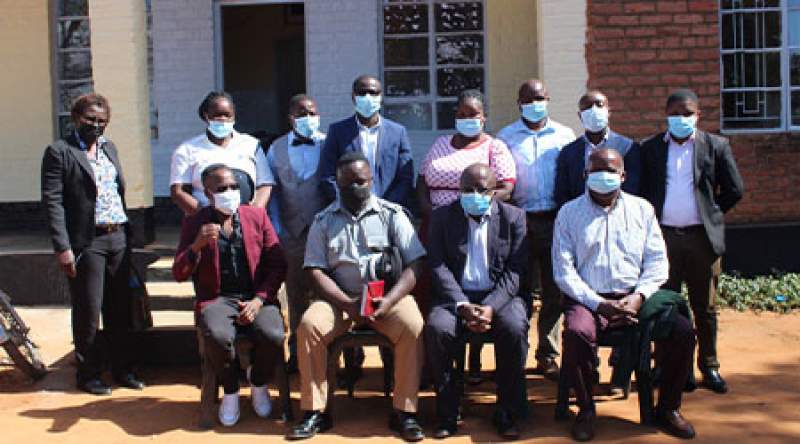 A team from National and district SGBV posing for a group photo. - pic by Steve Kalungwe

Neno district has been named a champion and model to copy in as far as ending sexual gender-based violence is concerned in the country.

Speaking to Zodiak on Tuesday, Assistant Director of Clinical Services in the Ministry of Health Mr. Hastings Chiumia says Neno district has managed to come up with realistic models that has made it possible to reduce gender related crimes.

"We have seen structures been put up such as homes, to support gender-based violence survivors, this is commendable as victims are assured of their uncompromised safety after their ordeal," he said.

In his remarks Chief Medical Officer at Partners in Health Dr. Chiyembekezo Kachimanga emphasized on the need to promote partnership, saying a lot has been achieved through collaboration with other partners such as the courts, police, NGO's and the community.

"These partners have made it possible to prosecute cases even in hard-to-reach areas. They have supported us with logistics to conduct court circuits which has indeed taught people lessons", said Kachimanga.

As a challenge, Dr. George Talama pointed, a member of Neno district SGBV taskforce team said lack of a first grade magistrate at lower Neno is making it difficult to prosecute and conclude cases in time.

"As a district we have only one first grade magistrate who is based at the boma, so every time there is a case, we need to mobilize resources to move the magistrate to that area, which is unfair to justice system delivery", said Talama.

Neno district coordinator for Sexual Gender Based Violence Willy Chisindo acknowledges concurs with Talama saying there is a need for the child protection section of the judiciary to provide a first-grade magistrate while saying conniving between close relations to conceal a crime is also a challenge.

On their part, Chisomo Bwanali from Neno Social Welfare office while applauding themselves on the achievement, reminded his fellow officers to remain vigilant saying being on the top comes with its own challenges.

"I would like to call my fellow officers to put more fuel in this tank so that we go much further in combatting gender based violence, we don't want to be beaten", he concluded.