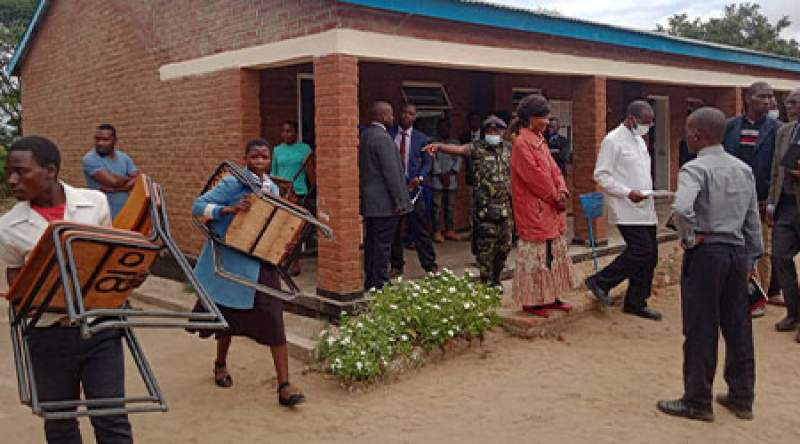 Minister of Industry and Trade, who is also member of parliament for Neno South Constituency, Mark Katsonga Phiri has handed over four constituency development fund class room blocks, a girls’ hostel and desks to three schools in his constituency worth MK 60.9 million.

Speaking at the handover ceremony, Katsonga pleaded with communities to take care of the structures saying patriotism is key in sustaining developments.

He said for example, school management committees should be in the forefront in making sure that school structures are in good condition.

"As government we need to tell people the truth in as far as managing government infrastructure is concerned, people need to take responsibility of projects meant to benefit them", said the minister.

He added that the projects, that include two class room blocks at Matope primary school and another two at its secondary school; together with a girls’ hostel are meant to uplift education standards of his constituency.

He then promises to tap water from Shire river to Matope primary and secondary schools using solar power panels to be mounted at Zalewa trade centre.

"This area should not be denied access to clean and potable water, we have Shire river nearby and will utilize it so that we tap water from it using solar energy", said Katsonga.

In his remarks, head teacher for matope secondary School, Robert Maoza thanked the minister for the projects but asked a laboratory at his school, saying learners at his school are not doing well in science subjects.

"These structures have come at a right time but we need more like a science laboratory to ease the problems that our learners face when writing science national examinations", he said.

He said that, learners cover a distance of 46 kilometers to Chifunga secondary school to sit for a science subject which is costly to both learners and their parents.

In his response, the minister assured the head teacher that he will consult his education counterpart to see how best to solve the problem.

Neno district council representative, Justice Limula appealed to the learners to work hard in class. He also appealed to them not to vandalize the structures.

With the coming in of the girls’ hostel, it means now Neno has two conventional boarding schools namely Chiwale and Matope.