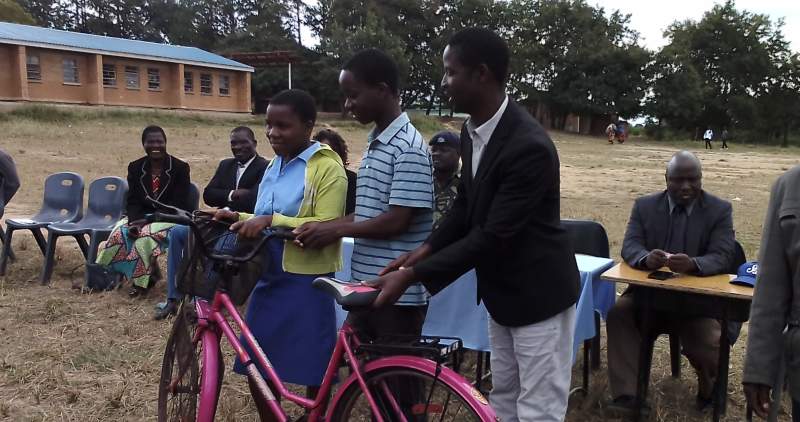 In a bid to ease mobility challenges of learners who cover long distances to access their nearest school in Neno district, FISD limited has donated 15 bicycles to learners at Chikonde Day Secondary school.

Headteacher for the school Wexter Zingwangwa said the move is part of FISD's approach of making education accessible for all under the Improving Secondary Education in Malawi with funding from EU.

"We approached FISD to help us with bicycles so that our girls who come from far areas do not miss classes and drop out of school due to long distances they cover", he said.

The headteacher further said that they held a meeting with parents of the beneficiaries to chart the way of taking care of the bicycles.

"We expect the parents and the learners to use these bicycles solely for traveling to school and back, we don't expect any use of them like carrying bags of maize or any other parallel duty", narrated the headteacher.

In her remarks Queen Sagawa who represented the District Education Manager said priority has been given to girls since they face a lot of obstacles on their way to school hence contributing to high drop out rates.

She then encouraged the girls to take this as an opportunity to realize their goals in life while advising the beneficiaries to take care of the bicycles.

One beneficiary, Sara Frank, from Joji village thanked FISD for the donation saying it will help her to get to school in good time.

" In the past I was arriving at school late and tired, this affected by studies but now am happy that I will always be punctual", she said.

The form 1 learner further said she will take care of the bicycle so that she finishes her studies and hand it over to the next beneficiary.

"This is a mile stone and we believe this is not the end, and we appeal to school management to utilize these developments so that our learners benefit and become good citizens", said the councilor.

Proceeds from the irrigation scheme are used to pay school fees and other services that needy students may want.

He then said, the next donation, which is coming soon will benefit boys saying they also face similar mobility challenges.