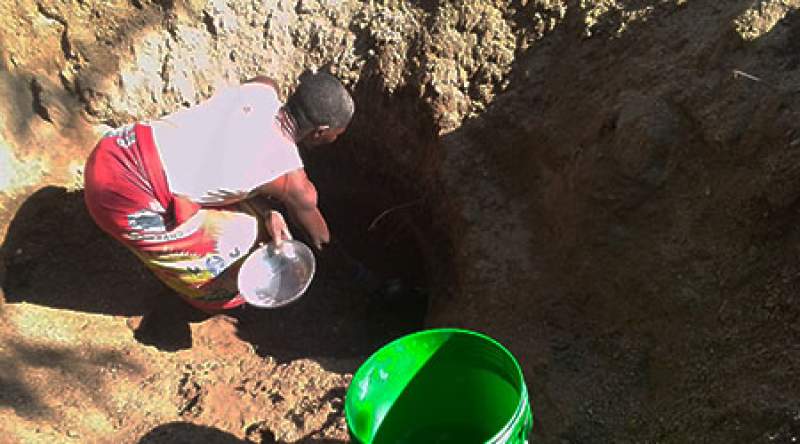 Well of life for the communities - pic by Alfred Guta

Access to safe drinking water is a nightmare in Nyowani village, Traditional Authority Mbenje in Nsanje district as villagers are drinking unsafe water from a well about a year after their only borehole broke down.

We visited the village where we spotted communities including women and children walking long distances in a thick forest to draw water from the well in a river called Chikowa.

One of the women who spoke to Zodiak Online, Grace Melo a mother of 8, described the situation as inhuman.

“We have been drinking dirty water from this well since last year. Our lives are at risk of cholera and other waterborne diseases. We are suffering, imagine skipping baths?” lamented Grace.

She added, “We are not washing our clothes. We had no choice but to follow this river. It is greatly affecting our livelihoods.”

Her sentiments were echoed by another woman, Fynes Medson, aged 48, a mother of five, who faulted authorities for taking long to address a serious water problem haunting them.

“They are not helping us, it is really affecting me and my family. Authorities can do better as the water problem has been there for close to a year now. What wrong did we do to deserve this treatment?

“We have been complaining but to no avail. Elsewhere in the same area of Traditional Authority Mbenje, people are accessing water with ease.”

Village Head Nyowani shares his subject’s concern saying, “I have been engaging authorities on the same but there has been no action from them.

“When women leave home in the morning, they usually return home at noon or beyond. Sometimes the water dries up in this well forcing them to walk a distance of 4.5 kilometers to fetch water elsewhere, the situation is unbearable,” said Village Headman Nyowani.

Deputy Minister of Water and Sanitation, John Bande, told Zodiak Online, the council and Member of Parliament for the area, were better placed to comment since the government disburses water fund for such purpose.

“Government is aware that some parts of the country have water problems. So the government devolved water fund to councils to ensure equal access to water.

“They can use such funds to repair the faulty boreholes or if they have depleted the funds they can use Constituency Development Fund (CDF),” explained Bande.

Member of Parliament for the area, Glady’s Ganda, admitted efforts to repair the only borehole failed but she was quick to say there is a borehole in another village called Milton which the households were allegedly utilizing.

“It’s not true that the 46 households from Nyowani village are drinking unsafe because they are temporarily drinking from a borehole in Milton village. We tried to repair the faulty borehole but things did not work.

“They also tried to sink a new one around March but because it’s a hilly area, they were not able to find any water after sinking up to 70 meters,” explained Ganda.

She added a new borehole will be sank in the area under African Development Bank (ADB) projects which has funded 12 borehole projects in her constituency.