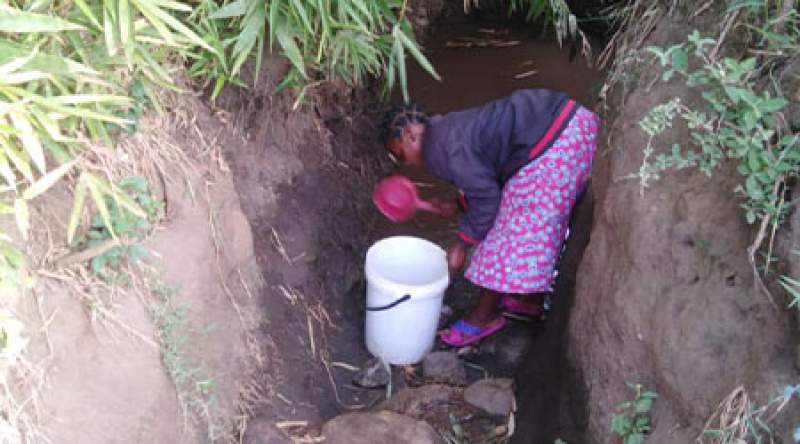 A swamp providing water to the communities - pic by Luka Beston

As cholera continues causing havoc in many parts of the country, communities in Mangazi Village, Senior Chief Chimaliro in Thyolo are now drinking in the unprotected wells and a river.

This is after the water table for the sole borehole at Chimvu Primary School went down before it also developed a fault some five months ago.

A woman Esite Nahuwe said life is unbearable since they are drinking water  suspected to be mixed with some residues from the nearby mission hospital which turns oily during rainy season.

"We frequently suffer from waterborne diseases almost every week here because of this water. We feel deserted. As you can see, this water turns oily since residues from that hospital spill into this Well.

Nahuwe appealed: "We are asking anyone who can come to our aid by drilling a borehole for us here because water here does not take time and we go fetch some to the swamp behind us for use."

Margret Nicholas and Esinati Amos who nearly broke into tears added they are forced to use water from unprotected wells and swamps where some children spit and excrete in as no one seems to care.

Similarly, Sub-Traditional Authority Mangazi is concerned that people are fetching drinking water in Chimvu river, adding, "it becomes worse during the autumn season, calling on well-wishers to intervene".

But speaking to Zodiak Online on Saturday, Member of Parliament for the area Masauko White, says he is not aware of the challenge as nobody has reported to him, but was quick to indicate that he will look into and engage other partners.

"What I know is that I have drilled a new borehole very close to Traditional Authority Mangazi so I do not know which is which. If that is the case, then I will try to transfer one which I wanted to drill somewhere to that side. Or I will engage some partners such as the Moslem and Christian bodies that are also drilling some to help," White said.

This is the situation as the Ministry of Health has put all the country’s 28 districts on high alert of the cholera outbreak to ensure quick response to containing the disease.

Currently, it has so far killed 70 people in 16 districts since March this year.