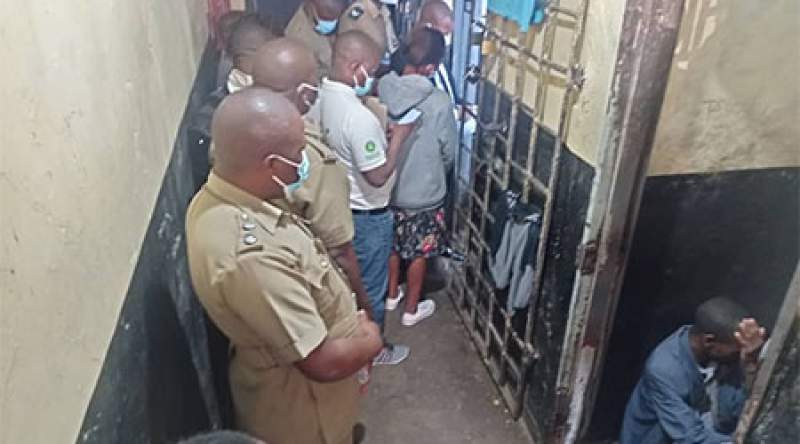 Second Grade Magistrate’s Court in Balaka has urged police in the district to continue exercising professional skills in handling of vulnerable suspects to access justice.

Magistrate Peter Mkuzi made the remarks when he made a surprise visit to the inmates holding cells to give bail to those whose 48 hour stay had elapsed to avoid congestion and uphold suspects right to justice organized by National Initiative for Civic Education - NICE.

"I have observed some challenges that the police is facing and I have advised them to reach out to stakeholders to help in building an extra room for suspects to ease up congestion," said Mkuzi.

"The  holding cells are very small. Instead of keeping 10 suspects in a cell there are more than 20 which is not right,. We need to work on," he added.

NICE, District Civic Education Officer, Henry Zekeria, told Zodiak online that Nice Trust is implementing Chilungamo Programme funded by European Union whose aim is to see that access to justice for vulnerable groups is upheld and to make sure holding cells are clean and suspects are taken to court on time.

"We do this often but here in Balaka this is the first time. We hope we will be carrying such checks with time under the project which is there for the vulnerable groups in our communities," said Zekeria.

Police Station Officer Gideon Chisale decried challenges ranging from transportation of suspects to Ntcheu and Zomba, lack of female and juvenile holding cells and lack of space where instead of 10 suspects, holding cells accomodate more than 20 suspects with one toilet.

Chisale, also highlighted on cleanliness of the holding cells that the rooms are cleaned twice a day to avoid breading of diseases.

Meanwhile, the magistrate has bailed out four suspects and agreed with the police to give three more police bails to other suspects.