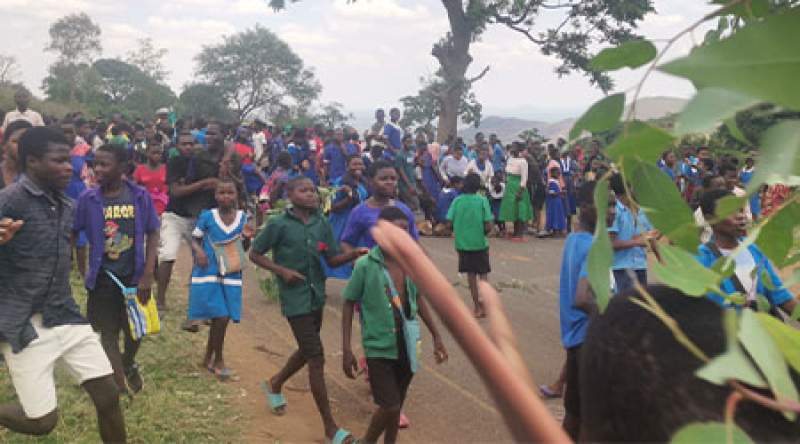 The learners during the protest - pics by Elijah Phompho

Some primary school learners in Chiradzulu were on Monday and Tuesday involved in clashes with law enforcers during protests.

The learners mainly from three schools of St Michaels, Matenjere and Lisawa who were protesting against their school authorities' decision for them to write end of term examinations on chalkboard marched to the district's education office to compel the education office to force their respective schools to return their K1000 contribution fee for the printing of the exams.

Upon not being convinced with the responses the earners barricaded the district's main road and pelted stones to vehicles which were attempting to pass.

This led the law enforcers to fire teargas as the learners started throwing stones at the district council administration block destroying windows in the process.

Tadala White a standard 7 learner at Lisawa primary school said, "What we just want is that we get back our money. We were promised that once we pay this money the exams are going to be printed. We are surprised with the change".

The District's Chief Education Officer, MacAllan Machemba said the decision to change the mode of writing exams came about as a result of the education authorities resolve for all primary schools in the district to be writing standardized exams in a bid to assess both the teachers and learners performance.

He said papers for the standardized exams were to be given to the teachers every day depending on which subjects they were to write and hence some teachers were not able to print.

Machemba said his office has resolved that all schools with capacity to administer printed exams should proceed to do so while those who are not able should not be forced.