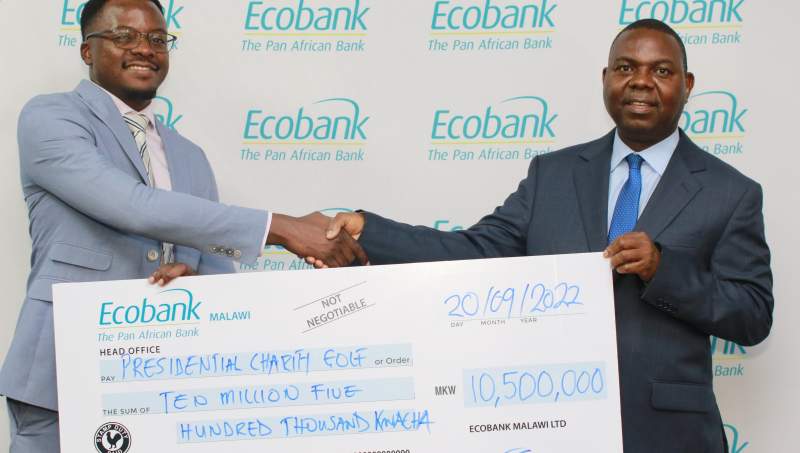 The Presidential Charity Golf Initiative has received another financial boost, this time from Ecobank Malawi Ltd which has credited the noble cause account with a K10.5 million cash deposit.

The tournament which is being held under the theme “Swing to Serve” aims at raising funds for underprivileged tertiary students and survivors of tropical storm Ana, which was launched by president Lazarus Chakwera.

Ecobank’s Chief Financial Officer, Fabiano Makolija said the sponsorship is in line with the Banks Corporate Social Investment (CSI) focus on Education. “Education is one of Ecobank’s key CSI focus areas, because as a truly Pan African Bank; we value the role that education plays in the economic development and financial integration of Malawi and Africa at large. This is why as responsible corporate citizens, we felt obliged to be part of this noble cause.

“We believe that this initiative will go a long way in uplifting and enabling many underprivileged tertiary students who will, in turn, play a great role in the economic development of our great nation in the nearer foreseeable future,” said Fabiano.

Committee member in the Presidential Charity Golf initiative who also happens to be Blantyre Sports Club Golf Captain; Chimwemwe Chimwaza has thanked the bank for its contribution to the cause.

“This is a clear indication that Ecobank values helping underprivileged tertiary students and cyclone survivors. We are very thankful to Ecobank for this kind gesture and sponsorship that will make a difference in the lives of those who are less privileged,” said Chimwaza.

The presidential charity golf tournament is scheduled for 8 October 2022 at Lilongwe Golf Club where the state president is expected to lead the golfers tee off for the noble cause.