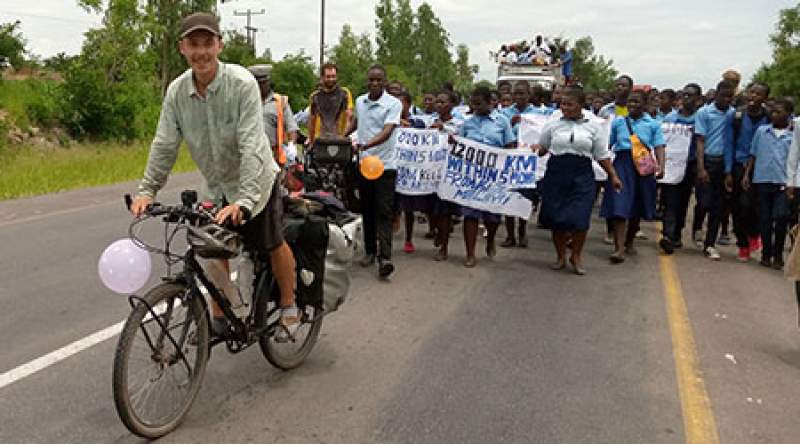 In a bid to bail out underprivileged children from education challenges, four Germans have cycled over 12 thousand kilometers to Malawian to raise funds meant for the construction of extra class room blocks at FACE education centre in Neno district.

Speaking to Zodiak, one of the cyclists Nils Tolle, says the move is provide equal education to all learners and make an impact to their communities.

"We chose to cycle from German to Malawi as a way of raising money to build extra class room blocks at this institution, and we are glad we have made it," said Tolle.

Arriving at Zalewa trade centre where they were welcomed by scores of learners and other people, Nils Tolle further says their journey is for quality education to the underprivileged children in Malawi.

He adds that, as a team, they believe that people who have made it in life have an obligation of giving back to their communities through various activities.

Headmistress at the center, Eluphy Chapendeka hailed the Germans for the gestures will asking fellow Malawians to be in the forefront helping the underprivileged learners.

"Let us join hands and help the underprivileged child to attain quality education just like another so that we arrest issues of poverty around their communities," narrated Chapendeka.

Country director for the school, Benjamin Gaus stressed on the need for government and the private sector to collaborate in making education affordable to all.

The cyclists have so far managed to raise over K14 million which will be used to construct extra class room blocks for preschool, primary, secondary and tertiary education.
Tags:
Published in: News In Southern Region
Read 938 times