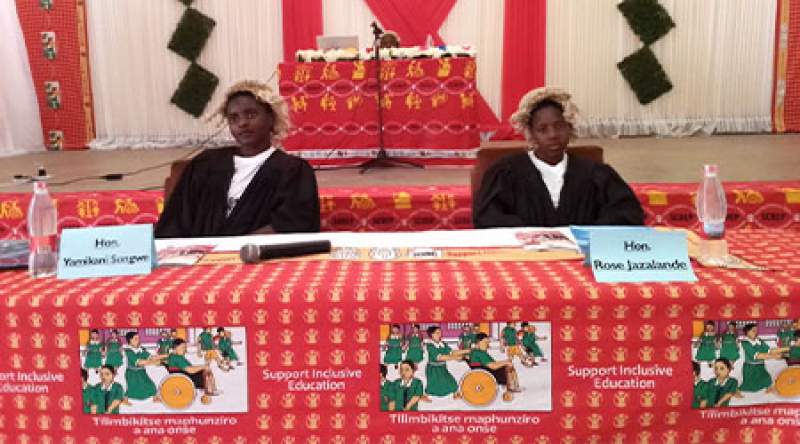 Chief Child Development officer in the ministry of Gender Harry Satumba, has disclosed that a majority of child marriages in the country are a result of decisions made by the children themselves.

He said this today in Neno district during the closing of the Children's Parliament organised by Community Action for Sustainable Development with funding from Save the Children.

He said, as a measure to counter this, the ministry is establishing a Children's Commission which will ensure that children are protected from all spheres such that they are mentally active to execute good decision making.

"Child marriage prevalence rate has been reduced from 42 percent to 38.7 percent and we blame the children for the rise in number of child marriages, they make this decisions themselves", he said.

He continued to call on the children to take responsibility in ending child marriages while asking parents and stakeholders to ensure that children are always healthy mentally and physically.

Speaker for Neno Children's Parliament, Triphonia Kaduya has lamented lack of seriousness by duty bearers to tackle their year in, year out resolutions.

She cited lack of potable water, conventional boarding schools, long distance to schools, favouritism by laws as issues which are hindering their rights.

"We want clean water, and schools must be close to us. We can work hard to be selected to a Community Day Secondary school, it's pathetic", she narrated.

Parliamentary Committee on Social and Community Affairs member, Overston Kondowe has assured the children that Parliament will discuss their resolutions in a bid to create a safe haven for them.

"We have listened them and will act on their resolutions to ensure that children are growing in safe environments", Kondowe was quoted as saying.

Save the Children Director of Programs Frank Mwafulirwa has since hailed the sessions, saying they are amplifying children's voices.

He said, the young parliamentarians are being provided with a platform to showcase their public address skills and gain confidence.

"This parliament is a good place for the children to relay their concerns to the duty bearers who in most cases are busy to listen to the children and we feel a lot has been achieved now",  said Mwafulirwa.

Neno has been conducting children's parliament since 2016.